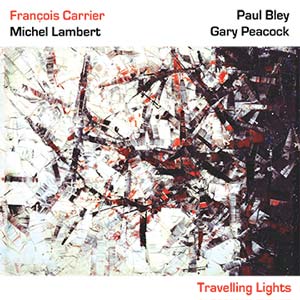 On the sad occasion of COVID 19 pandemic I was trying to react to the difficult situation of my beloved artists and in this way purchased in Bandcamp several early records of François, including the first ones with the Carrier/Lambert duo. In fact, “Poursuite” was in the pre-Lambert era, in 1994 at Studio Michel Dionne in St. Lambert. It was performed by a trio with Pierre Côté and Yves Jacques augmented, however, by Guy Bernier on tempura. Pierre become the pillar of the François Carrier Trio that will incorporate Michel Lambert in 2000. The group does not yet play a “kind free jazz”. The music they play is a complex contemporary jazz, with elements of free. It reminds me of music my beloved “early” Jan Garbarek and Charles Lloyd. The opening “Papoues” by Pierre Côté with a great theme, illustrates this perfectly. The second “Niskar” by Yves Jacques is my favorite. It is a nearly 9-minute long ballad, a little in the style of Joe Henderson. François’ “Blindfold Test” is another favorite of mine, mostly for the wonderful theme. Another François’ track that throws the listener on her/his knees is “Reflextion”, with absolutely stunning “walking bass” work of the section and the theme in the Sonny Rollins’ style. I also dig “Marylin” by François and Julie Pouliet, a ballad of beauty comparable to Sam Rivers’ “Beatrice”, notable also from Joe Henderson’s interpretations. “Intuition” is a trio record with Pierre Côté and probably his brother, François on drums. It is a very good album, but is lacking yet the tension and mutual synergy that the presence of Michel Lambert will bring. Still, among the 8 original compositions of François there are true pearls. The music continues the lines of “Poursuite”, perhaps being a little more peaceful and ballad oriented, as already the opening “Heart of the Matter” with a stunning bass solo suggests. My favorites “Petit Marius Deviendra Grand” in John Coltrane mood, and the title track, “Intuition” with the clear excursion toward the land of free jazz. This record of François belongs quite strongly to the post-Coltrane paradigm: in fact, the last track is a wonderful reading of “Lonnie’s Lament”. From the liner notes: “Intuition” is the second release from the François Carrier Trio. They perform frequently in Quebec City and it’s a treat to be able to hear these outstanding Canadian musicians. Mr. Carrier plays impassioned alto saxophone in a program of deeply emotional and spontaneous incantations. His band mates provide intuitive support and excellent solos. “Compassion” is an excellent trio album, a birth of the legend in a sense. It is the first records of François and Michel together. It was recorded by the quartet with François, Michel and Pierre plus an extraordinary pianist Steve Amirault. The music keeps the Coltrane-early Garbarek-Charles Lloyd style, and is simply stupendous. The opening title track throws the listeners in their knees later, but all the tracks are simply extraordinary. “Moksha” is a fast piece with a great walking bass/drums support. The motifs and the atmosphere of “Mind and Play” reminds me more of Ornette Coleman’s music. There is a great drums solo, later delicately supported by the alto and drums. I dig “Quest”, a fast track with particularly appealing saxophone lines. But, the best of the best is the closing, nearly 14 minutes long “Nying Je” with a truly Monkish theme and fantastic work of piano. This album, recorded at Studio Victor in Montréal, Quebec, was the Juno Award Winner for Best Contemporary Jazz Album 2000. Fantastic stuff!!!

“Play” presents The François Carrier Trio au naturel. Quoting the liner notes: “It may not come as a complete surprise to listeners who have been following Canadian saxophonist François Carrier’s work, but his new trio record has a very odd sense of coherence. It’s odd for two reasons: one, because “Play” was compiled from a total of seven different appearances during the trio’s 2000 Canadian tour, at locations from British Columbia to Nova Scotia; two, because most of the recording (six of eight tracks) consists of fully improvised music. Somehow all those stops on the road hang together quite nicely when the deed is done.” Indeed, “Play”, recorded live in 2000 and released in 2004, is a breakthrough album for Carrier-Lambert duo entering clearly the “kind free jazz” era. The opening “Play” is a wonderful example of this new approach to the music. “Le Marais” with fast “walking bass” part is another, yet very different example. Perhaps the most open track is “Open Conversation”, as the title indicates. In contrast, “Insomnie” is more “traditional”, but at the same time more beautiful and non-trivially melodic. I like “Ballet”, notable for the fantastic drums solo and alto/drums dialogues. But, my unquestionable favorite is “La Danse de Grand-Mie”, an 11-minute long “waltz” full of joy and allegría. The set ends with… “Happy Birthday”, which has sentimental values for me: François send me once to listen for my
birthday.

The remaining two albums are simply Masterpieces, written with capital M. “Travelling Lights” is by the dream quartet, in which the duo of Carrier – Lambert is joined by Paul Bley and Gary Peacock. The music created by this encounter is infinitely beautiful and simply incomparable to anything else. It carries, obviously, the specific and characteristic delicacy of the Bley-Peacock duo confronted with the tenderness of the Carrier-Lambert one. The tracks are named after continents. “Americas” by Gary Peacock opens this obra maestra with Paul entering inside piano. “Asia”, a lyrical free ballad, is notable for amazing piano passages of Paul, combined into dialogues with the alto of François. The first highlight for me is the 14 minutes long “Europe”, the most abstract and free piece with phenomenal work of the section supporting equally phenomenal piano and alto solos and duos. The other one is the 7 minutes long “Africa”, a more traditional track in terms of the motifs, but quite abstract because of Paul’s use of inside piano. “Travelling Lights” were recorded in June 2003 at Studio Victor, Montréal, Québec.

Finally, “Happening”, recorded by with a dream quintet, in which The François Carrier Trio is joined by Mat Maneri and Uwe Neuman. This is the first double CD by François Carrier in Leo Records catalogue. “Carrier is one of Québec’s (and Canada’s) essential musical voices, a saxophonist who has combined commitment and discipline with intuition and inspiration to gradually realize an arresting musical vision, one that is compounded of free-jazz traditions and a compellingly personal melodic invention. On “Happening”, Carrier combines both long-standing and fresh musical partnerships with free improvisation and contrasting tonal systems to reach levels of sometimes startling immediacy”. Recorded live at GESÙ in Montréal in April 2005, it contains seven tracks: five entitled “Happenings (one-five)”, and two short “Happening (encore)” “Happening (sound check)”. Nearly two hours of amazing music! This is kind free jazz fully developed at its best. The highlights are 33-minute long “Happening (one)” and the closing 32-minute long “Happening (five)”.