Something In the Air :

Since the realignment of East and West after the fall of the Berlin Wall, musicians of every stripe have found new playing opportunities and partners. In the former Soviet countries, one particularly fertile area for improvisers has been Poland. While westerners may figure Polish jazz begins and ends with Krzysztof Komeda’s score for Rosemary’s Baby and other Roman Polanski films, the country’s rich jazz history goes back to the 1920s and maintained its place during Communist rule. Today, like the equivalent attention paid to their ancestral roots among the children of immigrants, western improvisers have discovered the fulfillment of working with Polish bands or having Polish musicians part of their groups. 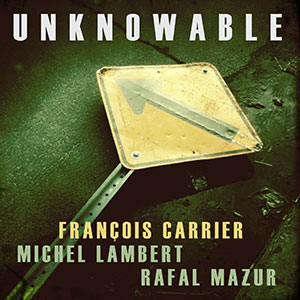 Case in point is Montreal alto saxophonist François Carrier. Unknowable (NotTwo Records MW 928-2, nottwo.com), showcases a touring partnership he and his Montreal associate, drummer Michel Lambert, have formed with Krakow-based acoustic bass guitarist Rafal Mazur. Authoritatively using both the guitar and double bass properties of his instrument with equal proficiency, Mazur is like the third partner in a fantasy ménage à trois, adding to the situation without disrupting the others’ union. An equal opportunity companion, his hand taps add percussive weight to Lambert’s rolling ruffs and pops, while his array of thumb and finger positions animates Carrier’s skyward smears or stressed multiphonics. Listening Between, the first track, could serve as a description of how the three operate throughout: not only shadowing each other’s propelled textures, but also anticipating sound patterns to fit what will soon be heard. Carrier’s initial churlish reed-straining on that track for instance is soon pulled towards accommodating mezzo-like melisma as Mazur strums his guitar as if he was backing an operatic tenor. With Lambert beating away stoically, the bass guitarist loops out multiple theme variations, as compressed buzzes slide from Carrier’s Chinese oboe for a unique interaction. Broken-octave communication characterizes Unknowable, the date’s centerpiece. Like an extended length of hose unrolling, Mazur’s staccato finger style sets up a continuum that’s matched by the saxophonist’s rubato cries which retain some sweetness. Eventually rim shot crackles and cross sticking from Lambert resolve the outbursts into a satisfying thematic whole. Still, it’s indisputable that the three didn’t want to let go of what they achieved musically. Like guests at a great party who dawdle before leaving, Springing Out, the next track, and Dissolution, the concluding, barely 90-second one, come across as coda and then as coda to the coda of the title performance.