Freedom is Space for the Spirit (FMR Records, 2016) 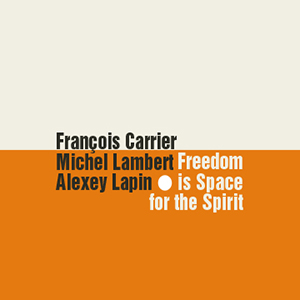 This is a well performed modern jazz album, which is led by Francois Carrier on alto saxophone and Chinese oboe, with Michael Lambert on drums and Alexey Lapin on piano. This is their sixth album as a trio (with number seven on the way!) and the empathy between the musicians is palpable in their interactions and support for one another. The music is entirely improvised and was recorded live at the Experimental Sound Gallery in St. Petersburg in 2014. Their sound is open and spacious with the improvisations developing slowly and then blooming into wide ranging music. Carrier has a full bodied saxophone tone and leads some bracing improvisations that are taken at an exhilarating pace. He moves the saxophone through a number of filigrees and structures that coalesce into a free and unencumbered flight. The group develops a crystalline sound which builds in abstraction, akin to the ambiance of a lonely night in a big city, but still remains accessible with the musicians in full support of one another. When the musicians move dynamically through a number of textures and tempos they keep the music interesting, performing exploratory jazz that continuously evolves as it proceeds, developing layer upon layer in the process. The lack of bass allows the music to float freely and not be pinned down, giving space for the improvisations to develop organically. Carrier’s oboe adds an interesting tinge to the music, allowing an Eastern feel to add to the overall texture of the music. This was a fine album, of interest not only to for free jazz fans, but modern jazz fans in general. It goes beyond strict musical boundaries into a form all of its own. Using a blend of modern jazz and free improvisation, the group is able to create space for spontaneous and soaring interactive playing. Freedom is Space for the Spirit – francoiscarrier.com.