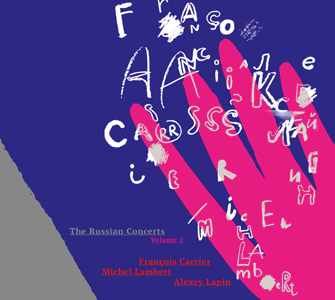 Recorded in three locations in Moscow in 2013,  this very powerful collective improvisation is led by Francois Carrier on alto saxophone, along with Michael Lambert on drums and Alexey Lapin on piano. The make a statement of purpose right off the bat on “JCC II” which has strong saxophone echoing grandly around the venue, the group as a whole is sharp and strong, especially Carrier who displays epic and protean power on his instrument. “JCC III” begins with a probing section for piano and drums, Lapin is quite patient in dropping showers of notes before Carrier comes in and the tome of the music begins to darken. Lambert drops the hammer and they are off with squalls of saxophone and drums framed by rumbling dark bass piano chords. Opening with strong group interplay, “JCC IV” allows Carrier to rear back and let loose a steaming stream of notes, honks and wails, before throttling lack and ending the piece with the sounds of quiet breath. “ESG-21 III” is an epic performance as the band begins the piece with protean wailing coming fast and hard, particularly Carrier who winds up and lets loose like a coiled spring, absolutely all out and thrilling. But as the booster rockets fall away, the music changes shape entirely. As if they have now been launched into the cosmos by the ferocity of the opening section, the music becomes a long and open exploration of musical space and time. This is the longest performance on the album and demonstrates the band is far from just a fire-breathing free jazz unit but a group that has almost telepathic unity that allows for the use of dynamics that shapes this excellent and exhausting album.