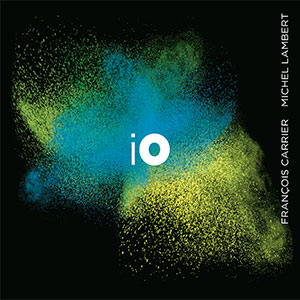 Listening to the nine improvised duets on saxophonist François Carrier and Michel Lambert‘s latest release iO, one gets the sense the creative process comes not from friction, but from friendship. The music isn’t forged from a skirmish, like, say a Peter Brotzmann/Han Bennink record might be. It has more in common with Charles Lloyd‘s duo with Billy Higgins or maybe Lee Konitz duets with Elvin Jones.

That’s because their friendship began in 1998 and has been forged over multiple tours and a dozen recordings, including two excellent duos, Kathmandu (FMR, 2007) and Nada (Creative Sources, 2009). The music here is taken from two Montreal concerts recorded in 2012 and 2013.

The disc opens with the lengthiest and title piece at nearly 18 minutes. Lambert’s drum rolls and cymbal work erect a skeleton framework for Carrier’s alto saxophone endeavor. You can almost hear him listening (if that’s possible), as he modulates his sound to the saxophonist’s changes in volume. The remaining pieces are much shorter in duration and consumption (meaning deliberation) less demanding. “Blueshift” opens with Lambert’s lean sinewy drum progression before Carrier works some upper register magic. “Big Bounce” opens with a whistle (Lambert?) and Carrier’s Chinese oboe, then switches to saxophone playing hints of Love Supreme over Lambert’s mallet work. “Superstring” displays some powerful extended saxophone technique and “Ida” advances lightly with with barking notes and a scouting party’s pulse. The ending track “Nutation” strains at the edges, first with oboe then saxophone in upper registers. Even while Carrier exhausts his breath, Lambert is ever present. Beautiful.