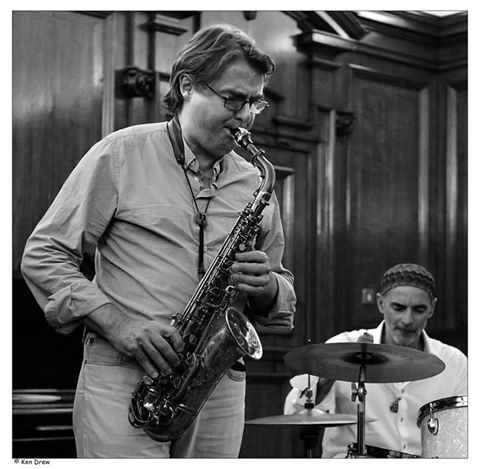 Pathos: Francois to begin a ritual question, how was born your passion for Jazz?

François: I was born passionate. Even in the womb I think! It comes from my mother’s taste for good music and also from my older brother Yves. He studied trumpet at the Conservatory and I followed his path. I persevered and he stopped to earn money. I guess I should have done the same.

But to be honest though, it all happened when I was a teenager. I heard a Phil Woods and a Charlie Parker LP. Wow! I was in wonderment right away. What a voluptuous tones and precise articulation they had. I started imitating them right on the spot. Fortunately, I kept being myself all the way through. My relation with this music always kept me passionate.

Pathos: Often people are frightened by Jazz, believe a genre too difficult to understand and therefore prefer to listen other kind of sounds. Francois, do you think that the Jazz is a music for the chosen few?

François: There are a few answers to your question. You mention « difficult to understand ». Understanding is a really deep action of the Being. Understanding comes from wisdom. To really understand anything one must absolutely be silent. Listening then becomes possible. Understanding comes out of the state of being silent and open. Openness is «The » biggest challenge of our human society. Being open to each other, being open to differences. For instance, in order to love anything or anyone, one has to be silent and open. Yes – we – most humans are frightened, period.

Have you noticed that most people are more inclined to be nostalgic during difficult times? If we look carefully through time, we have a tendency to take refuge in what we know. The same stands for music.

Jazz is alive and well. It is and always will be. Of course there are many kinds of jazz. All we have to do is open up.

Wake up and Dream!!!

Pathos: Throughout your career you have played with many musicians. How important were these experiences to your professional growth and which artist has had the bigger impact in the formation of your style?

François: I had my own musical identity very early in my development. My teachers tried hard making an imitator out of me but they never could simply because I already felt the call. Some people call it a spiritual connection. It felt more like a resonance. I could feel this resonance in Monk, Charlie Parker, in Canonball, in Elvin Jones, in Billie Holliday, in Coltrane’s playing and in so many great jazz players. I still relate to these giants as a musician.

My first experience with such a spirit was at 16 years young when I had the opportunity to play a couple of standards with Oscar Peterson, in the Club of his Hotel in Quebec City. What he said after sitting in with him was very inspiring: “If you want to become a great jazz musician keep playing with great jazz musicians”. Wow!

It was very naive of me sitting in with Oscar without asking but the fact is I loved the feeling and the energy that came through. So I did that with many other great musicians all along. Sometimes I would ask and some other times I would simply go on stage. One night in 1981 in Victoria B.C. I was going to a jam session at Pagliaci’s and as I approach the club I could hear an unusually huge tenor tone playing. As I got in the Club, I realized that Dexter Gordon was playing. He immediately told me to join him when he saw me carrying my horn. I instantly jumped on the stage and played the rest of the set with him, with them I mean.

I kept dreaming and over the years I invited many great musicians to play with us. Of course, drummer Michel Lambert has played a major role in my musical evolution. We stared playing together in 1998. We have kept the spirit going since.

Pathos: It is often said that as far as the music it all was written, there is no possibility to create something really new and in fact looking around it seems often to hear old things already proposed, if anything with the only change of the contamination, crossover between genres. What do you think about it also taking into account that you’re a jazz musician and so you play a musical genre that does of research and innovation its fundamental characteristics.

François: Innovation comes from openness and curiosity, from intuition and resonance. New discoveries are made possible only when these attributes are connected to one another.

We live in a word where most of us need, in order to communicate, to label everything and that is unfortunate. Our senses are limited. Imagine for instance if we were able to hear all the sounds (music) of the whole universe. We would become insane wouldn’t we? As a matter of fact, it is possible to hear all that by opening up to our whole self and by being attentive, deeply attentive. What one hears then is infinite beauty, infinite symphonies. So, I think is it absolutely pretentious to say that everything has been said. Simply ridiculous!

But again, when we observe how our own habits are formed I understand. We are more confortable with the known than with the unknown. So we insist on staying ignorant by referring to our conditionings, to our thoughts and to our believes.

I have good news for us all. Everything in the universe is Music!

Pathos: Last question: and finally Francois tell us a little of your plans: a new record, new concerts, what are you preparing for your fans? Meanwhile thanks for your kind availability, good luck for your musical career and Merry Christmas!

François: There is so much to do. In 2015, If I can find the funding, I will release at least 5 new albums.

The first to come out should be a live duet recording with drummer Michel Lambert and I on FMR Records in Mars or April. Just around the same period the polish label Not Two Records will publish a recording made at Alchemia Klub in Krakow Poland on June 2 2015 with bassist Rafal Mazur, Michel Lambert and I. This one is absolutely fantastic. Then 2 other albums will be released later in September 2015 with British bassist John Edwards and pianist Steve Beresford. These new albums were all recorded during our 2014 spring tour.

I am planning a spring tour for 2015 as well from May 21 to June 6th in Slovenia, Poland, Russia, UK and Germany. Details will soon be available on my web page.

I have been working on a project of a Free Opera based upon my research on human ego (my ego). I plan on having some of the greatest musicians alive with a female voice solo, some dancers, an amerindian choir and some video projections. The Opera in four acts will be showing the birth of the ego, the development of the ego. The protagonist will go through a phase of Samsara to finish his/her struggle through a Nirvana experience. I also hope to find funding for this one but it will probably cost a lot to put together.

While touring, I have been taking pictures for many years. I would like to publish an artistic picture book describing, in photos, how I perceive the world. Of course this book will have a musical CD included and eventually a virtual platform like an interactive web page that could show the pictures while listening to the music associated to these pictures. Each picture would also be associated to a specific day of the year. kind of a work in progress.

All together, I must still have enough great music recorded and stored to release no less that a dozen new albums. All it takes now is someone crazy enough to sponsor my artistic actions.

I take this opportunity to thank you for your openness. Have a very good year 2015 and please keep the amazing work with Pathos. As you know, I have been using the Classic One integrated amp for the last 8 years and I still listen to music on a daily basis. I match the amp with a pair of Totem Acoustic Model One Signature. Wow!